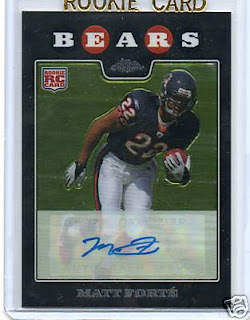 As mentioned yesterday, Matt Forte is one of the players who's week one play will effect the hobby world.

Sure enough, a quick scan of eBay proves the point.

There have been almost 400 new Forte listings since the game last night, which accounts for just about half of his current listings.

One card of his that has really taken off is the 2008 Topps Chrome Rookie Autograph. At the end of August, the card could be had for around $20, but today, this card is selling for around $50 (with some pushing the $70 range last night and this morning.

I don't really see Forte becoming this year's Adrian Peterson so I don't see him maintaining this hobby prominence. Remember how everyone flipped out on Ahmed Bradshaw and Kolby Smith during last season? It seems people don't learn their lesson very well.
Posted by Andrew Harner at 2:03 PM

Many of our collecting brethren have "Memory Loss" when it comes to buying!
It's human nature to want what you don't have, no matter how many times you get torched w/ a 2-300% loss on your aquisition.