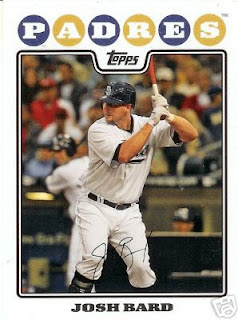 Anytime there is a long game in baseball, there are always some no-namers heavily involved. Last night's game between the Rockies and Padres was no exception.

The game was scoreless until the 14th inning when both team scored one run. However, it was Josh Bard's bases loaded single that continued the game going - until the 22nd inning.

Bard has bounced around the league since being a highly touted Indians prospect in the early 2000s. But he has found a home in San Diego where he is hitting .292 with six RBIs this year.

The best part about this story is that Bard is also the reason the game ended. After Willy Tavareas beat out an infield grounder, he stole second and took third on Bard's throwing error. Troy Tulowitzki was the next batter and doubled him in.
Posted by Andrew Harner at 7:31 AM