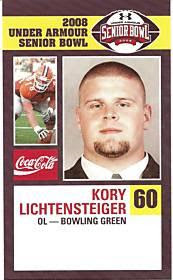 Well, I have a new player to collect.

Bowling Green's center Kory Lichtensteiger was selected by the Denver Broncos in the fourth round of the 2008 Draft.

While this is his only card that I know of, Lichtensteiger should have plenty more issues coming out over the course of the summer.

Collecting his cards will quite a bit easier than collecting former Falcon QB Omar Jacobs whose 2006 cards were mostly game-used and autographed.

Lichtensteiger will just have less abundant, harder to find cards but also nearly no demand.
Posted by Andrew Harner at 12:15 PM