We can't always be right

And around this time last year, I wasn't.

But, I'll put out another bold prediction for this season. The biggest quarterback bust of the draft will be Mark Sanchez.

1) The number 13: that is the number of career starts Mark Sanchez had good numbers in during his one year as USC's starter. Here are three other quarterbacks who also had just 13 strong starts in college: Ryan Leaf, Rex Grossman and Derek Anderson.

2) Matt Leinart: Yesterday I talked about Matt Leinart's failures in the NFL and how is a party type who uses his celebrity every chance he gets. Sound familiar Mr. I was in GQ?

3) USC: USC is in the Pac-10, arguably the worst of the major conferences. USC just happens to have the best set of talent in that conference. Which leads me to my point, USC hordes individuals and surround their players with stars. Sanchez was surrounded by too many playmakers at USC and played against weak competition last season so there was never really a good indication of his abilities. Chances are if you want to be good in the NFL and played college ball at USC, you better hope you were on defense.

Nevertheless, collector's are like USC in that they are hording Sanchez's cards and paying nicely for them. 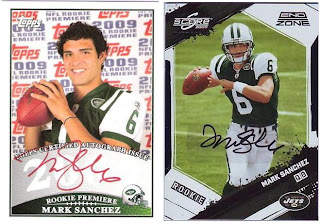 Posted by Andrew Harner at 9:30 AM