As a card collector and new UFC fan, 2009 Topps UFC just makes sense to be something I am interested in. While a little too step for me pricewise at the moment, the cards and how well they sell on the market facsinates me.

Despite 2009 Topps UFC Round 1 dropping in Feburary and a second series on the horizon, it is still a very sought after release. And with the Ultimate Fighting Championship's popularity growing with every new match, the product is likely to remain popular for the foreseeable future.

While many people are dropping hundreds of dollars on autographs of superstars like B.J. Penn some non-autographed cards are bringing in quite the share too. And while not as significant, base and parallels are selling better than what they do in other sports. For example, a Royce Gracie silver parallel numbered to 288, recently sold for almost $20. Meanwhile, a 2008 Select Gold Zone Tom Brady /50 recently garnered just one bid for $0.99. Yes indeed, UFC is here.

And just as is the case in Topps football and basketball, a red ink autograph variation is the card to get. Finding a star will make your investment in a box worthwhile.

After Penn retained his lightweight championship belt at UFC 101, there was a spike in his autographs sales, with the highest one selling for $305 the night of the fight. With UFC 102 a week away, Randy Couture and Antônio Rodrigo Nogueira as the main draw, the winner should see a small spike in card sales. Because this is not a title bout, I don't see autographs spiking as much as Penn's did. 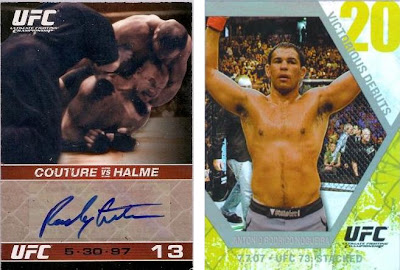 Posted by Andrew Harner at 9:04 AM