Every year, there are those quarterbacks from smaller schools that are hyped up and get drafted. Being a fan of the Mid-American Conference, I understand this completely. Josh Harris. Charlie Frye. Bruce Gradkowski. I mean the list of failed players goes on and on.

It's likely to get a few more names this year as Tim Hiller, Dan LeFevour and Tyler Sheehan are all graduating from the MAC and have decent shots of going pro. And it's very unlikely all four of them are like Ben Roethlisberger.

However, there is one guy who means a bit more to me than the others from a collecting standpoint. That is Omar Jacobs. There's no reason he is more collectible than Harris - another BG alum - but his cards just happened to come out when I first started really getting into football (2006). He never saw a down in the NFL (except for preseason) but has found some success in the American Indoor Football Association, where he won the league MVP and led the Florence Phantoms to a championship in 2009. He was expected to join the Tampa Bay Lighting of the AFL - a game that would really have brought out his strengths as a player - but was forced to return to Florence when the AFL folded. I don't anticipate he will ever get back to the NFL, but that makes super collecting him pretty easy; no new cards of his to chase. But at the same time, that's kind of a bummer.

I currently have 207 different Jacobs cards of out 553. Of those 553, just 362 are numbered above 10, and I have over half of those. I've always said if I can get to 300 different Jacobs I will call the collection a success, but with each passing day, that challenge gets more difficult.

When I first started collecting him, eBay generally had about 50-75 listings on a regular basis. Today, it's generally between 25-25 - including many cards I already have. And chances are if I need the card, it's one of the higher priced ones. As a college kid, spending $10 per card on a regular basis just doesn't fly like it does for many of you guys.

Nonetheless, I've used the ad money I received for the Party Poker ad I now have on the right side of the blog to buy up some of those rarer cards I need. Below are four cards I have recently purchased, running myself about $30. Which goes to show that failed college stars don't always lose their collectability.

If you have any Jacobs cards, please let me know as I would definitely be open to trying to work out a deal for them. 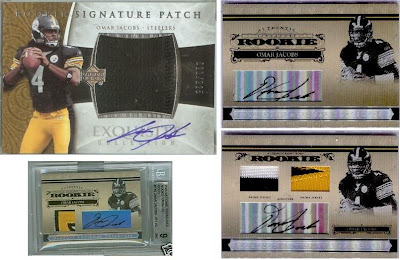 The thing about collecting a lesser-known player is the swings in prices. With stars like Brady, AP, Lebron and Kobe, you pretty much know what to expect from their cards selling on eBay. But with someone like Jacobs (and like the basketball player I collect), prices ebb and flow, sometimes with no discernible reason. Sometimes another individual has a hankerin' for a particular card and goes nutty.

Good pickups on those four Jacobs.

Now, a few items you've come to expect from me:
"It's likely to get a few more names this year as Tim Hiller, Dan LeFevour and Tyler Sheehan are all graduating from the MAC and have decent shots of going pro. And it's very unlikely all four of them are like Ben Roethlisberger." You only mention three quarterbacks there other than Big Ben.