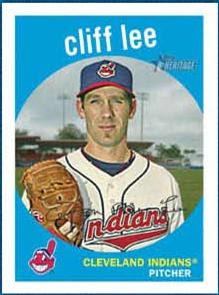 While I don't mind seeing an update set for 2008 Topps Heritage, I do mind some of the reasons this set exists and some of the things you can expect to find in your box.

Of course the official set name is Topps Update and Highlights presents 2008 Topps Heritage High Numbers so it somewhat makes sense that U&H cards are included. It's like a backwards Bowman and Bowman Chrome though. Bowman is the base brand that puts out Bowman Chrome so they include two Bowman Chrome cards in every pack of Bowman. So what this should be is two Heritage high numbered cards in every pack of regular Update and Highlights much like what used to be done with Topps Update Chrome.

Now, what is the gimmick going to be? An Evan Longoria perhaps?
Posted by Andrew Harner at 9:32 AM

I really enjoyed Topps 52 the last two years, and don't mind terribly that it was phased out in favor of Heritage II. What I do mind is essentially being forced to buy two hobby boxes in order to complete the set.

Heritage II would be a great idea if they'd limit the SPs like they did with 07 Topps 52 and didn't force U & H on me.

I'm looking forward to the Topps Heritage High Numbers set because I love Heritage, but it does suck that they're sticking U&H cards in the packs.

To freeandylaroche - here's a better idea. Buy one hobby box, and buy the rest of the cards that you need to complete your set from Sportlots for 10 - 20 cents each. That'll be a lot cheaper and less frustrating than a second hobby box.