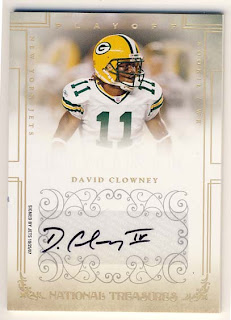 Drafted in the fifth round by the Green Bay Packers last season, David Clowney slowly became one of the forgotten rookies and disappeared from the Packers roster.

By October 2007, he was gone from the Packers and signed onto the Jets practice team (as you can see from the small print next to the autograph). After being released and resigned two days later, released again and resigned again a month later, Clowney showed up for the Jets in their first 2008 preseason.

While he didn't do work against the first team nor is he listed on the team's depth chart, the Favre to Clowney pass may end up being reality if he continues to put up numbers like 163 yards and two 70+ yard touchdowns every preseason game.

Clowney's cards are few and far between and fairly easy to find at a good price. With just 48 current eBay listings and 120 listings ended over the past 30 days, many of Clowney's autographs can be had for just $0.99. If Clowney can find a way to make the team, can Favre's strong arm help him get more of those 70 yard touchdowns?
Posted by Andrew Harner at 7:12 AM

Dude, its pre-season. Bobby Wade was amazing last pre-season. Guess what, he wasnt amazing during the regular season.

Anything is possible. I'm just throwing it out there. Clowney is a young guy with potential and have Brett Favre with him in New York could be a big help in getting him up the depth chart.