Poll Archives: Which of these is the biggest problem facing today's hobby? 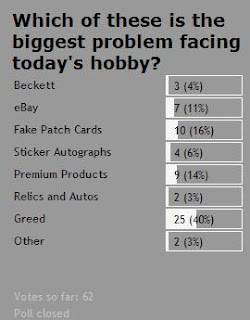 This is one of the biggest topic in the hobby blogsphere and everyone seems to have a different take on what the answer is.

There is the eBay clan.

There is the high-end product clan, myself included.

And there is the greed clan, the majority of my readers included apparently.

Surprisingly, Beckett received just three votes in this poll. I know there are a few bloggers out there who think Beckett is the root of all evil so that was definitely the biggest surprise in this poll. I mean, sticker autographs received more votes than Beckett did.

In another surprise, Fake Patches received 10 votes. It's nice to see that some collectors actually see that there is a problem with fake patches. On one particular message board, they say anyone talking about fake patches is beating a dead horse.

Just like last time, if you are one of the two people who voted for other, I would love to hear what you think the biggest problem is.
Posted by Andrew Harner at 4:20 PM

I voted "other," and the reason why is the biggest problem facing The Hobby today is the lack of respect the card manufacturers have to the collector. Over the last twelve months Upper Deck and Topps (especially Topps) have gone from giving collectors what they want to what they think they want.

Did anyone actually want a product like Topps Moments & Milestones or UD A Piece of History/Artifacts?

Is anybody actually trying to collect Generation Now?

Is it right that a certain card company posted to their website that the first true rookie card of a particular player would be in a particular product; then pulls his card at the last minute -- without mentioning it to anyone until after the fact -- and replaces it with a gimmicked insert card of that same player?

Not only is it not right, it's bordering on fraudulent.

But over the last twelve months, we've been subjected to them nonetheless.

All of these actions -- and many more -- show that the card companies have taken their core customers for granted. And what about their non-core customers? The "lapsed collectors" who Topps, UD, and D'Russ so desperately want to bring back into The Hobby. How do you explain any of these shenanigans to a non-collector?

I voted for Beckett.

I'd love for someone to explain how eBay is a "problem" for the hobby. eBay might be the best thing to happen to the hobby since the invention of cardboard.

I'd also love to know why high-end products are a problem. I can't afford most of them, so I just don't buy them. It doesn't bother me that they're made and that other collectors enjoy them. Now, if the problem is that the card companies might be spending too much time focusing on the high-end products, and not enough time trying to make quality lower-end products, then I can understand that...

eBay is good and bad for the hobby. It is good because it gives collectors a place to regularly buy cards they would normally never see. One the contrary, eBay has helped ruin the value of cards. Everywhere you look when dealing with cards is eBay value this, eBay sale price that.

Now, without eBay, nobody has a problem with Beckett.

You notice that at card shows, cards are priced based on Beckett value rather than eBay. If eBay never existed, those values wouldn't be seen as exceptionally high.

I also firmly believe eBay is one of the reasons there aren't nearly as many card shows as there used to be. The number has been at least cut in half in Ohio in the last ten years.

Nevertheless, the hobby would still exist without eBay. It would be a different place, but it would still be around due to online card forums.

You hit the nail on the head with your comment about companies focusing too much on high-end products, which is why there were included on the poll as an option.

I don't think that eBay has ruined the value of cards. I think it has revealed the true value of cards. After all, the value of something is only what someone is actually willing to pay for it, right? If we accept that, then the Beckett values have always been meaningless.

The existence of eBay and other web sites might have played a small role in the decline of card shows, but in my opinion it the reason for fewer card shows is that there are far fewer collectors than there were 10-15 years ago.

Thanks for conducting the poll and posting the results. It's led to some good discussion.

You can also look at it this way. Before eBay, people used Beckett to determine the value and what they would pay for cards. Now, some people toss the Beckett aside and exclusively look to eBay to determine values.

I think because eBay is spread across the world, people can find certain cards easier and aren't willing to pay as much because of that. Before eBay, a collector in Los Angeles would have to pay a premium for Mike Piazza cards because he was a local player. With eBay, that collector can find ten other people who are selling the same card in direct competition with each other. Let the lowest price win.

Basically, it's because of how widespread eBay is that the values changed. Before eBay,the other ten collectors would've been selling the card at a show based on the Beckett value rather than to a bidder on eBay.

I understand both sides of eBay's influence on the card market, but I still lean more toward the side that says eBay hurt the values of cards and Beckett as a company.

The purpose of these polls is to get people talking about the results a week later. I try to find some of the controversial questions to ask my readers in hopes that a few people will have a strong opinion towards different answer choices.

I voted other for those Damn 1of1 cards. Topps and Upper Deck are having contest the most 1of1. It is retarted.