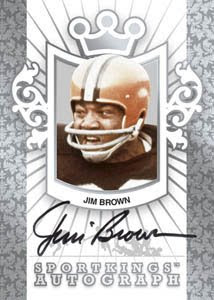 After a wildly popular 2007 release, Sportkings Series B is bound to be just as, if not more, popular as inaugural release that included the first Pete Rose autograph and relic cards.

I know, what could possibly be a bigger draw than the first Pete Rose cards in years especially since they were autographed or contained relic pieces? While there might not necessarily be any bigger single card draws this year, the whole concept of the set is growing in anticipation much like the demand for Topps Allen & Ginter has increased as the years go by.

The base set continues the numbering from last year's issue like Topp Turkey Red did from 2005 to 2006. Starting at card 49 (Sonja Henie - Figure skating) and ending with card 108 (Oscar Robertson - NBA), the set includes many different sports stars ranging from major sports like baseball and football to smaller ones like poker and weight lifting.

With three packs of three cards per box, collectors can expect to find at least one relic or autograph per pack. And they better be good considering the $350+ price tag each box will carry. There were 4,500 boxes produced.

The biggest draw in 2008 Sportkings will be the cut signatures, which feature some of the rarest in hobby history. Spanning over seven sets, collectors can hope to pull Jack Johnson, Payne Stewart, Teddy Roosevelt and John S. Douglas, boxing's founder. But, if you aren't lucky enough to pull a cut signature, there are still plenty of headlining regular autographs. Included on the autograph checklist are two Jim Browns /100, three John Elways /40, two Walt Frazier /50, two Arnold Palmers /50 and three Peles /35 (print runs include both silver and gold).

The autographed relic cards are also a big draw the set and include names like Ernie Banks /50, Elway /30 and Barry Sanders /50 (Print runs include both silver and gold). Add to those the Autothreads insert which an autographed strip of event worn memorabilia, and you have the best relic cards you can hope for. Annie Duke, Pele, Tony Perez and Angelo Dundee complete the Autothreads checklist. Each Autothreads card has nine silver versions and one gold version.

Not only that, the regular relic cards have been limited in production, with no more than 40 relics produced for one set.

other relic inserts include Numerology, Sportkings Lumber, Cityscapes Double and Triple, Decades and Passing the Torch.

The 25 card Patch set are the second most common relic cards coming with a production of 20 gold and 10 silver including short prints of Jacques Plante and Jean Beliveau which have the same production as the Single Memorabilia short prints.

A new relic set called King-Sized relics is bound to be popular. The 40 card set gives collectors a jumbo swatch (probably all patches) that are also 1/1s. Included in the set are Bode Miller, Pele and Payne Stewart. The Sportkings Logo set is also a 1/1. The 60 cards included a painting of the player alongside a manufactured Sportkings patch.

But, the best relic set in 2008 Sportkings is the Vintage Memorabilia cards. The set consists of seven players who were in the original 1933 Sportkings set: Howie Morenz, Babe Ruth, Eddie Shore, Jim Thorpe, Ty Cobb, Ace Bailey and Red Grange with a piece of memorabilia. These seven cards are 1/1.

For additional information about Sportkings or to see a full checklist, please click here.

I think it goes without saying that Sportkings is for advanced, high-end collectors only. I do have to admit that I was happy to see that the relic cards were cut down in production and that no true legends on any sport were used for any of the common relic sets.

So what do you do if the player you are super collecting is in Sportkings and you don't have the funds to buy up their cards? Basically, you can basically do three things: hope you find a hidden auction on eBay, make a good trade with someone, or wait it out until everyone is in a tizzy about 2009 Sportkings and buy then. Even the latter is still going to put you back some if you are on a limited budget as many 2007 base cards still sell from $5-$10.

I know I won't be getting any Sportkings any time soon as I can't afford a $350 gamble at this stage of life, but maybe some of my readers will. Let me know if you plan on buying any of these and also let me know what you pull.
Posted by Andrew Harner at 1:54 PM

Dang, I forgot all about this crap. I can't wait to see the bitterly disappointed pack rips on youtube, last years' were epic.

Well, if you think about it, it is easier to get a disappointing break than one that isn't.