You knew it was coming...

There are at least five "rare SPs" in 2008 Topps Series Two that have hit the market. Three of these are in the base set and two are from the Campaign insert set.

The fact that three of these cards come from the base set has many collectors fuming at the idea of gimmick cards. Others are saying enough is enough as Topps has had almost ten gimmicks since 2006.

The most controversial SP among collectors is the Kosuke Fukudome. Instead of his Chicago Cubs uniform, Topps decided to feature Fukudome in his 2006 Japan World Baseball Classic uniform. The card is also unnumbered and does not feature the Rookie Card Logo.

The pre-release checklist provided by Topps said that Fukudome would have a regular card in the set, but that card number was replaced by Andy Marte. Many Cubs and Fukudome collectors are simply turning to Upper Deck for a Fukudome rookie card.

The first few of these on eBay sold for $100, but one current auction that ends in a day is only at $33. 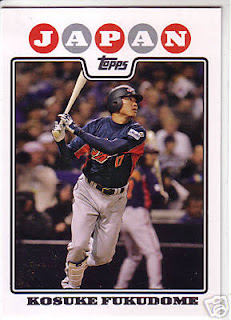 The second base SP is Chicago White Sox rookie Alexei Ramirez who is featured in his Cuba World Baseball Classic uniform. The card has the same features as the Fukudome.

This card currently only has three listings on eBay with the highest a Buy-It-Now at $250 and one with a $9.05 bid. 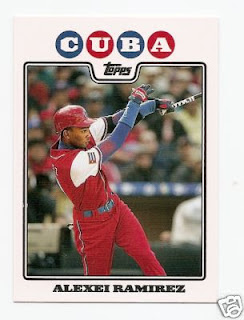 The third, and hopefully final base SP, is Yasuhiko Yabuta a set-up man for the Kansas City Royals. His card is made up exactly like the Fukudome. One listing on eBay is wanting $99 BIN and another has been up to $7.52. The campaign insert SP is none other than our favorite celebrity government official Arnold Schwarzenegger with the party name of "2012?" where others have Democrat or Republican. 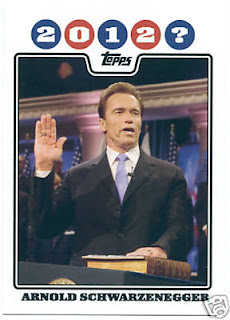 According to rules adopted by the US, Arnold will not be eligible for president in 2012 because he is not an American born citizen. So, I don't quite understand why Topps included this card in the set.

I have discovered a fifth SP from the set after the original post. Al Gore has four Campaign cards listed on eBay ranging from $0.99 bids to $399 BIN. 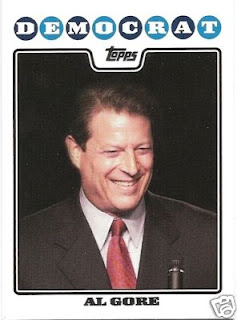 It's hard to say what the gimmick in Topps Update and Highlights will be, but I can pretty much assure you that there will be at least one. That set might not even sell that well because some people across the blogging world are giving up on Topps as a brand after these gimmicks.

Specifically, Charlie of Hawk to the Hall cancelled his plans to buy a Series Two box after seeing the Fukudome card on eBay.
Posted by Andrew Harner at 3:15 PM

Hey Andrew. Thanks for the mention and the link. I read your blog every day. Keep up the good work.