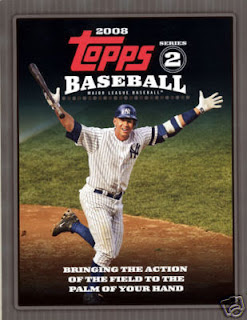 "We are not releasing quantities, but I will say that all of these cards are extremely short printed," Clay Luraschi said.

This was the answer given by Topps to the number of the six short prints that have surfaced from its Series Two brand.

That's a real helpful number guys. Thanks for clearing everything up for us. I mean the number of customers you've probably lost from this incident is probably greater than the number of all of these cards that have been produced.

By reading the top baseball card blogs and general card chat areas on sports card forums, even a novice collector could see that multiple people are refusing to buy any more Topps cards because of this.

Don't believe me? See for yourself.

Stale Gum
Hawk to the Hall

These are actual responses to threads regarding the Topps SPs on various sports card forums across the Internet:

"Getting tried of these mind games"

"I have always been a Topps collector but this year was the first time I stopped buying their products. Specifically for this reason. I'm so tired of the gimmicks and just want Donruss back in baseball."

"I can't blame them for doing it. And I'm just one collector, but I'm one collector who isn't buying their crap any more. Thanks for nothing, Topps."

"I'd rather buy Upper Deck anymore than Topps. That's how much I *love* Topps."

"I have given up doing sets with SP's - it's too expensive and too much trouble."

"I think what makes these new NNOs and SPs so unlikable is that they don't even have some sweet, unusual design. They just look like the plain old base set cards!"

I'm sure there are several others who haven't written it out online that have begun to support Upper Deck a little more than they did before too.

I have been an avid supporter of these gimmicks in the past, but Topps even put me behind the idea of anymore gimmicks now. I will still buy their stuff, but I hope I don't have to dedicate this many posts to an incident when Topps Update and Highlights comes out.

If these gimmick cards didn't take cards from the regular set, I think everyone would enjoy these a whole lot more. The fact that the pre-release checklist had base cards of Kosuke Fukudome and Alexei Ramirez listed on it only to have these SPs released is a big part of why everyone is in such a fuss over these.

If you notice, much of the complaining is about the base cards instead of the Campaign cards. This is because these cards were never expected to be released and are a nice surprise to collectors. The fact that the Johan Santana card actually has a card number on it will definitely "please" set builders.

As long as Topps keeps these cards away from the base set and the base set design, I think collectors will keep their cool next time anything like this happens. If there had been a base set version of the three WBC SP cards featuring the players in their actual MLB uniforms, I don't think anyone would be making nearly as big of a deal about this.
Posted by Andrew Harner at 3:57 PM

You listed two guys who are known for being extremely critical of these kinds of "gimmick" cards. Just because they are refusing to buy anymore Topps cards does not mean that there are people behind them who are willing to do so. Any novice collector can see that.

If you or anyone come across these cards and don't want them, feel free to send them to me (at no cost to me of course, since these cards are obviously "worthless"). I would be happy to take them off your hands.

Hey James. Have you actually read my blog?? I showered praise on Topps for 2008 Finest. I have also(once again if you had read my blog, you would know) purchased more than 1 box of every Topps product released this year. I bought 5 Jumbos and 2 Hobbys of series 1. I don't collect Upper Deck. I have collected Topps since 1987, and you're damn right I'm extremely critical. I've spent close to $2,500 on Topps product this year, so you can bet your sweet bippy that if I don't like something, I'm going to be EXTREMELY critical, and have absolutely no qualms about it. If you paid $125 for a product from Target or Wal-Mart, and it was absolute crap, you wouldn't complain?? If so, then you sir, are a saint.

I'll lay 8 to 5 right now that in 3months the Fukudome cards will be $10, and you'll be able to pick up a Jumbo of Series 2 for $60. They're already selling for $72 on eBay because nobody wants them. The game used cards are un-original and tacky looking. The auto checklist is even more horrendously weak than Series 1, and the retared SP's are just the icing on the cake.

There are roughly 10 million Chicago Cubs fans in the U.S. Out of however many of them are collectors who want a Fukudome rookie card, which brand are they going to buy to get a card with Fukudome in a Cubs uniform??

I'm showing that some people are upset with Topps. I never said everyone is. I never said I was. I am getting close because the massive amount of these gimmicks that are being produced is becoming a bit much. They seem to produce more and more every time a new base set is released.

As you can see, I have edited the post to reflect the opinions of several collectors on different sports card forums to show that more than just Stale Gum and Hawk to the Hall are tired of these tricks.

I think I was more focusing on the first site than yours. I read your one post about it and lumped you in the same category. And again, that is your right to complain. That was not the issue, but still I apologize for the error.

Because I really don't see why there is such a problem with these cards that people will say, "I'm not buying Topps anymore," I tend to be skeptical of those who make these claims.

As for me, I am going to test my patience and wait for the values to go down on these six cards. One way or another, I'll get them.

I don't complain about not getting the "hits" because, quite frankly, I don't care for them (relics and autos). I guess I set my expectations low when it comes to getting those kinds of cards.

As for complaining, I've done some. As long as I can get a complete set out of a box, I'm happy (and there have been some instances where this is not the case). I was critical of Topps when they overloaded last year's product with inserts and then 10 parallel (red letter) cards, which was the cause of my failure to complete a set out of one box.

I am a Cubs fan, love Fukudome's play, but I'd rather wait for the U & H version of his card than buy UD packs to get one.

Well, now they just screwed up the base set with the Amazing Criswell Santana card. I just wasted money on a box of this junk and now I won't be able to complete the set because they super short printed the last card in the set. They couldn't just make it a variation card, no... That had to make it card 661. Now there's two Topps BASE sets in the past three years that have been rendered uncompleteable for the average collector due to horse crap gimmicks. Good Job Topps.

It's the same crap they pulled with the Bonds card last year, and it's the same message over and over again. Topps does not care about set builders. They care about moving product, just like any other corporation.

Now Charlie, did they not send you some nice stuff for your disappointing Co-Signers box? You were also the one who had some nice words for thier customer service if I remember correctly.

Despite that, I agree completely. The card hobby has become a business.