Card of the Day: 1996 Sports Illustrated for Kids Tiger Woods 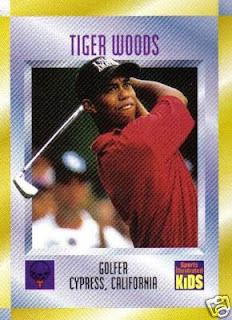 For almost twenty years, Sports Illustrated for Kids magazine has been producing cards of all sorts of sports stars.

Ranging anywhere from mainstream sports stars like Tiger Woods and LeBron James to up and coming college stars like Michael Beasley and O.J. Mayo to bowlers, cyclists and Olympiads, these cards are popular with both kids and adults.

The cards come in a nine card sheet in each SI for Kids magazine and contain a wide variety of different sports stars on each sheet. For example, the sheet containing the Tiger Woods rookie card has two NBA players, two NFL players, one WNBA player, one NHL player, a figure skater, a women's tennis player and Tiger.

The magazine often produces the first cards of rookie player because they are not bound by the various Player's Associations licenses of producing cards.
Posted by Andrew Harner at 8:42 AM

I stumbled upon a mint condition, uncirculated, uncut (it is actually perferated so its not torn into separate cards) sheet with the Tiger Woods card. How much would this be valued?

I stumbled upon a mint condition, uncirculated, uncut (it is actually perferated so its not torn into separate cards) sheet with the Tiger Woods card. How much would this be valued?

It's probably worth a few hundred dollars. If you are planning on selling it, wait until Woods comes back and wins a major (or is in the process of playing a major) because that is when he is in the highest demand.

nooo, that cards is worth about 20,000. i have one too, in mint condition as well. the first one sold wasnt in mint, so price may be more than what i say. dont sell it.

its selling on ebay for over 2 grand..so you both are morons