Card of the Day: 1996 Collector's Choice You Crash the Game Ken Griffey Jr. 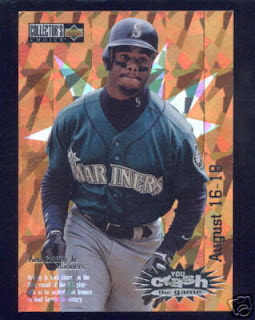 As a kid when Collector's Choice was still a somewhat popular set, I was always thrilled when I saw a Crash Card (1:5) in my packs, especially in 1996.

For those who have forgotten or never knew in the first place, the Crash Cards were basically contest cards disguised as inserts.

Each of the 30 players in the set had three different cards which had the dates for different three or four game series on them. If the player hit a home run during the series marked on the card, collectors could exchange them for what the back of the cards called "Super Premium You Crash the Game Cards" of the player on the front. Today these are more simply known as exchange cards. The exchange was simple: the card itself and a $1.75 check or money order.

The contest period ended in November of 1996 so you had to be quick about things if you had a "winner" from a series in September.

These cards also had a gold parallel (1:48) which were good for gold exchange cards.

Collector's Choice also had these cards in 1995, 1997 and 1998, but the 1996 cards will always be my favorite because they are the most flashy of the four years. My personal best 1996 card is the gold Tim Salmon, but my best overall Crash Card is a 1997 Instant Win Mark McGwire which was seeded one in every 721 packs and has been worth as much as $60 while I have owned it.

Because I was just nine when these cards came out in 1996, I was too young to think about exchanging one of my cards for a different one so I never exchanged any of the ones I personally pulled.

Anyone else have a good Crash Card story?
Posted by Andrew Harner at 8:01 AM

One of the years that they did the contest, something happened and the games didn't get played (this is in Football), or there was an error, I forget the truth. But anyway, if you pulled a gold Crash card and sent it in that year, you got a full set of the winner cards...or was that Hockey. Darn, I can't remember.

I won a few football sets and a couple of other cards but the best crash redemption I had was this one right here: