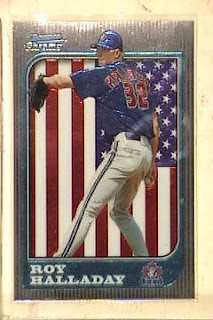 1997 was a good year for Bowman. They introduced Bowman Chrome and Bowman International parallels.

The International parallel was the the one that died off though.

Running from 1997-1999, the Internationals had a different look each year. In 1997, they backgriound was replaced by the flag of the player's birth country. 1998 featured backgrounds with a map of the player's birth area. My personal favorites are the 1999 version. In 1999, Bowman replaced the background with skylines of the birth state or country.
Posted by Andrew Harner at 8:37 AM

Do you have any Bowman Chrome '97 for trade?