Topps Trickery Department Back At It 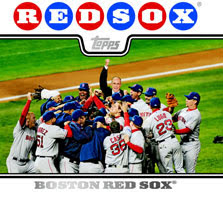 Here's what The New York Post's Richard Wilner had to say about Topps's next dive into trick trading cards:

February 5, 2008 -- The digital imaging wizards at Topps baseball cards are at it again - and this time failed presidential hopeful Rudy Giuliani makes a cameo appearance on a collectable card.

Only he probably won't be too happy about it.

The limited-edition card is a none-too-gentle jab at the outspoken Yankees fan who pronounced last October that he would be rooting for the Red Sox to win the Series because he was an American League fan.

Giuliani's position shocked many Bronx Bomber loyalists - and led to a Post parody at the time (inset above).

"We read about Rudy rooting for the Red Sox and we thought - why not put him in the middle of the celebration," said Clay Luraschi, baseball brand manager for Topps.

I like the fact that Topps has been having fun with cards lately. I'm not so thrilled with Upper Deck's retailiation cards, but it's nice to see that the companies can still put some fun into a multi-million dollar industry.

Not to mention, the card has garnered national media attention on Yahoo! Sports and ESPN which the hobby can always use.

See it on eBay
Posted by Andrew Harner at 8:49 PM