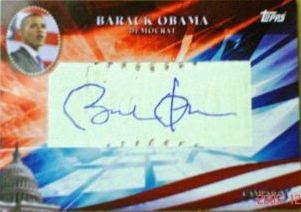 Topps has been leading the race for presidential cards this year. And while the Hillary Clinton Upper Deck Presidential Predictors "error" card has been selling for more than $1,000, a Topps card has now stolen the two highest sales.

Topps Presidential Cut Signature Collection had a recent sale of over $3,000 for a Barack Obama.

As for the Upper Deck card of Clinton, the most recent eBay sales are at about $1,800. The sad part is, I could've bought one Buy-It_Now for $729 and almost did, but I can't afford a $700 risk right now. Oh well, that's how things go sometimes.
Posted by Andrew Harner at 6:55 PM