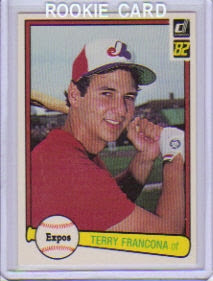 The Red Sox like their man. And I don't blame them.

After not winning the World Series for an eternity, Terry Francona has taken them to two titles (2004, 2007) since taking over as manager in 2004.

Now, he will be around for the next four and possibly six years if he can keep up his good record after signing a contract extension.

It's just a good thing for the Red Sox that Francona's mangerial record isn't as lusy as his player record was.

Over his ten journeyman seasons, Francona hit .274 in 1731 at-bats gaining just 474 hits. Although he did have a .990 fielding percentage and struck out a batter when he pitch a single perfect inning in 1989 with Milwaukee so I guess he does have a small claim to fame as a player.
Posted by Andrew Harner at 1:19 PM